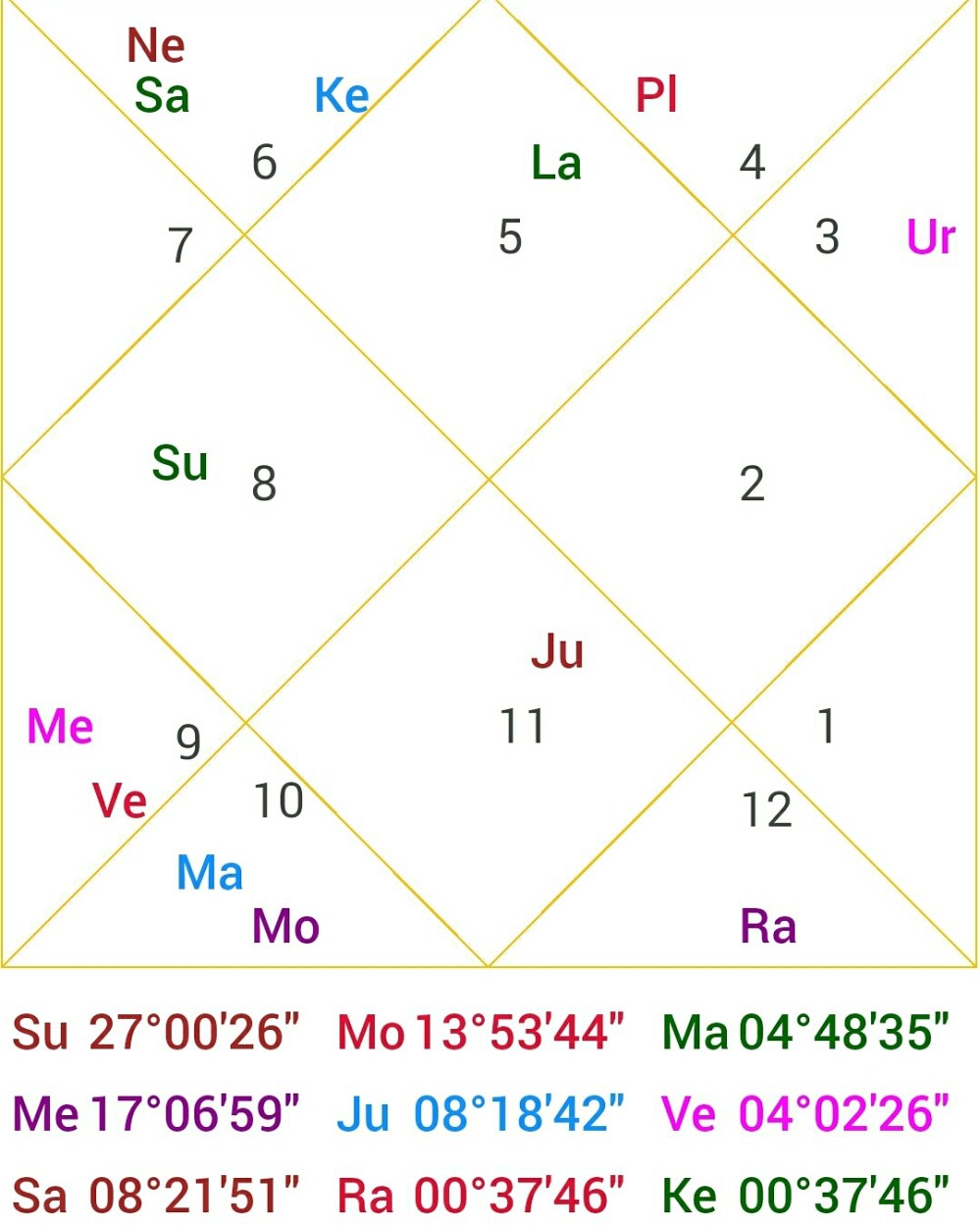 Let’s discuss about the horoscope of superstar Rajinikanth

Yoga’s in horoscope of Rajinikanth which gives fame

Known for his oratory skills in dialogue delivery in the films which he acts in, gives him instant fame. It’s because Saturn and ketu’s placement in Virgo, i.e. sign of Mercury. Here its 2nd lord of communication and 11th lord of gains, achievements is conjuncted with 3rd lord of arts, creativity and also 10th lord of profession, Venus. His almost every film has punchlines delivered by him in an inimitable style, and these punchlines often have a message or even warn the film’s antagonists.

Both placed in 5th house of dignity and fan following. Because 5th lord Jupiter is placed in 7th house of public image, from here aspecting all vital house, that is 11th house of honours, 1st house of self and 3rd house of arts, creativity, valor gave him high ethical standards and moral values. His rise of fame happened in his Jupiter dasha.

All the above stated combination formed by position, aspect or conjunction gave him huge fan following. His followers worship him.

In the field of arts and entertainment he made his mark very well. But besides this he also has an ambition to come into active politics. His lagna lord Sun is placed in 4th house of Parliament. 6th, 7th lord Saturn is aspecting this Sun. Also means will develop differences with people placed in high command in government. 4th lord Mars is exhalted placed in 6th house of competition along with Moon, the 12th lord. This signifies that he’ll fight elections. It’ll not going to be a cakewalk, winning is not going to be so easy, he’ll have to go through struggle to get his seat of power. Here struggle means contesting in election.

From Moon its Mercury’s major period, which is 6th lord placed in 12th house, conjuncted with 10th lord Venus. It confirms contesting for elections.

Events in the life of Rajinikanth

As 4th house, it’s lord and karka Moon, all are afflicted, therefore he lost his mother at the age of 9 only in Mars/Rahu dasha.

His interest in acting started developing from early years of his childhood particularly from 1962 and from there on he pursued it sincerely. It was Mars/Venus dasha

In Rahu major period starting from 1965 till 1983, he tried his best to make his career. As Rahu is placed in 8th house, it’s depositor Jupiter in 7th house aspecting all three, 11th, 1st and 3rd houses, helped him carve out his career. From Moon, Rahu is in 3rd house of efforts and creativity; he worked hard to achieve his suitable place in Cinema industry.

During Jupiter major period starting from 1983-1999 he established himself as a commercial entertainer. Almost all the films released during this period were highly successful at the box office.

Between April-May 2011 he was hospitalized because of dasha running Saturn/Mars. Both connected with 6th house of illness

Start of Political Career of Rajinikanth

From mid of 1993 in Jupiter/Sun his interest in politics began to develop and in the following years i.e.1995, Rajinikanth began supporting the Indian National Congress after meeting Prime Minister P. V. Narasimha Rao. But in 1996, when the Congress Party decided to align with AIADMK for the assembly election in Tamil Nadu, Rajinikanth changed loyalties and supported DMK-TMC alliance and asked the people of Tamil Nadu and his fans to vote for that alliance. This alliance had a complete victory in 1996. It was a milestone victory which reflects his grip in the state politics.

He had the potential to be successful in Indian politics due to his popularity and fan base alone. Since Rajinikanth’s influence in the 1996 election, many of his fans in Tamil Nadu called for his entry in politics, particularly for him to contest for the post of Chief Minister of the state.

But after mid of 2017 in Satrurn/Jupiter/Mars period he finally made up his mind and later that year announced entry into active politics on 31 December 2017 and confirmed his intention to contest in the 2021 Tamil Nadu Legislative Assembly elections in all 234 constituencies.

According to his charts he should have started his political career, earlier in his Saturn dasha. Because between 2000-2006 duration his running dasha was very favorable that his dream would have become reality. Without much effort he would have come into power.

However period starting from march 2019 will be a testing time for him. Particularly in April 2019 when Rahu/Ketu axis will be formed in 5/11 houses. 2nd, 11th lord Mercury, which is major period lord, conjuncted with 3rd, 10th lord Venus, will inspire him to form alliances and rope in more associates in his party. Running dasha will support him in this Endeavour, but after October 2019 he will experience tiffs of politics, what does the taste of holding seat of power actually means. 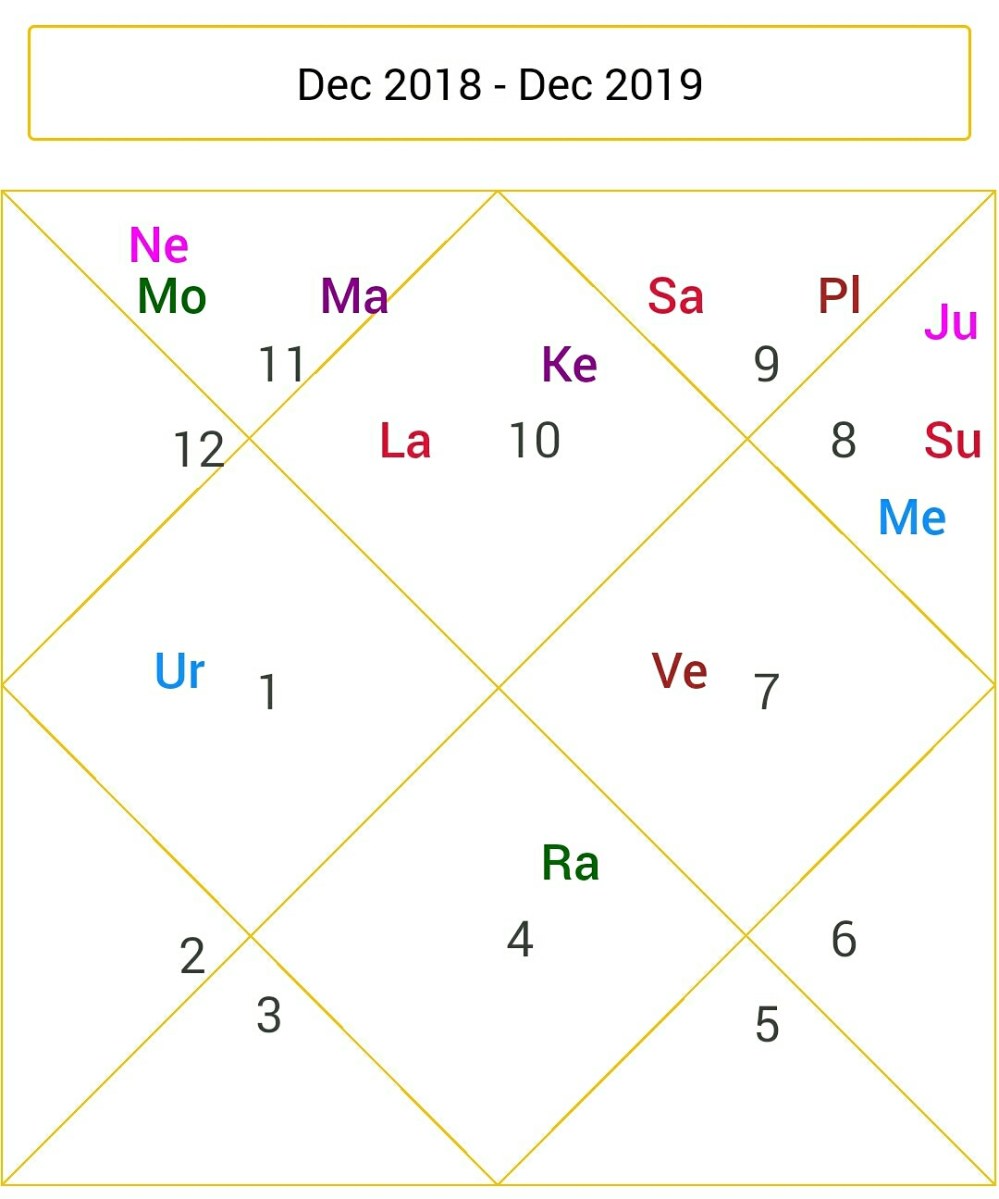 Varsh kundli also confirms the above. As 10th lord Venus is in it’s own house. 4th lord Mars in 2nd house alongwith 7th lord Moon, aspected by lagna lord and 2nd lord Saturn from 12th house. 11th house and its lord is strong enough to give him success in the year 2019.

Thereafter from mid of 2020, portfolio or focus will change from the prevailing pattern but only to give future shape to his political goals.

The full bloom will start from mid of 2021, when dasha will deliver favorable results at the time of state assembly elections.

The best of his political career will start from 2022 onwards.