is destiny being human with Salman Khan ?

This is the horoscope of famous cine star Salman khan. His life has been an open book.  With most of his life events are acknowledged by media because of which not much is concealed thereon.  The facts can verified through all the information uploaded on internet.

For Modeling, Acting in films, television etc… the planets which plays main role are Rahu, Venus, Mars and Mercury.  Here Rahu which signifies curtain where movies are screened in theaters is aspecting Mercury posited in 10th house of profession. The point to be noted here is, depositor of Rahu ie. Venus and depositor of Mercury ie. Mars, both are conjuncted in 12th house with another creative planet Moon. All are aspected by 11th lord Jupiter, due to its retrograde motion

His career was a promising one, as his 10th lord Mars is exhalted, which took him to greater heights in his career, all due to his own efforts and hard work

Besides 11th lord of earnings, Jupiter is also 2nd lord of bank balance.  So it’s aspect is potential to deliver enough monetary gains

The most talked about topic on Salman Khan

when will Salman Khan he get married?

Here Many astrologers got failed in predictions, because they failed to monitor the promise present in horoscope with life events

Now let’s examine what is promised in his destiny.

In spite of so many affairs, why marriage didn’t happen?

Reasons for No Marriage:

Malefic aspect of cruel planets. 12th lord Saturn and Mars posited in12th house, on 7th house of Marriage. This gives conflicts and dissatisfaction, therefore ending all relationships on a bad note and became sour. Which gave him mental turmoil upto an extent of hysteria,  making him doing such peculiar and weird acts,  either in fit of rage and anguish or on account of excessive emotional outburst of feelings which sometime took him into depression because here 6th lord Moon is involved. Moon is karka of Mind and feelings. On close scrutiny of degrees of Moon, one can observe it is in gandaant. Means last degrees of a sign.  Such position of Moon, as explained by our sages is very dangerous because it gives behavioral problems to the native.

Retrograde aspect of Jupiter on 7th lord Sun. In Navamsha chart separative Sun is placed in 7th house, in a watery sign, which a problem creating issue.  Besides here Sun 8th lord of obstacles and is aspecting 6th lord Mercury, placed in Ascendant.

Venus has an important role in horoscope, with respect to Relationships issues.  Here, Venus is in Sign of Saturn and conjuncted with Mars.  In Navamsha chart, Venus is in sign of Mercury, but aspected by Mars. This combination gives several intimate relationships with opposite sex.  From Venus, 6th, 8th and 12th houses if afflicted, one cannot get happiness or fulfillment from opposite sex, which happens to be true in this case. Venus is also in a paap kartari yoga ie.compresed between Sun and Saturn on either side, making it uncomfortable

Mars is planet which gives aggression, valor, stamina to fight back, extra strength and  energy, here besides being karka of 3rd house, its also lord of 3rd.  Person with strong Mars is capable of expressing one’s desire and also to fulfill his urges. Its conjunction or aspect on Venus ignites the passion for physical needs of body.  In such combinations, one indulges in such activities for life long or up to a longer period of time, during a lifetime. So such combination spoils steady relationships or marriage 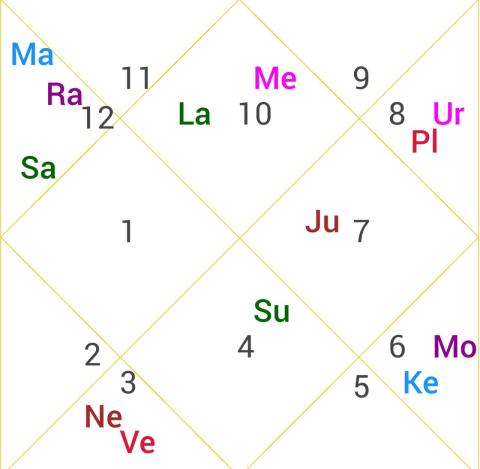 Moon is 7th lord Navamsha chart is in mutual aspect with malefic planets Mars and Saturn. So hope for marriage vanishes away. Observation on degrees of Moon, one can see it is in gandaant. Means last degrees of a sign.  Such position of Moon, as explained by our sages is very dangerous because it gives behavioral problems to the native. This gives hyper sensitivity and mood swings which disturbs him a lot, resulting in anger, which comes out as a reaction to any such activity that offends him.  Affliction on Moon and its conjunction with Venus is another combination for no marriage or break up of Relationships. Affliction on Moon causes disturbance in Relationships. Influence of Saturn on Moon, makes Kumar yoga, means bachelor

Another planet which is to be scrutinized for multiple relationships is Mercury. If in affliction, one develops relationships with opposite sex without considering what society or people will say about it.  Here Mercury is in the sign of Mars and is in Rahu/ketu axis. In Navamsha, it is in sign of Saturn aspected by Sun.  That’s why he is seen always openly in public with female companions.

As his 12th house is lively with conjunction of planets like Mars, Venus and Moon. Therefore it is activated. 12th house signifies comforts of bed, so here with all these planets which are completely capable to deliver results; he did get his share of fun with women. In spite of not being married, big boss, must have enjoyed with several female, and it will go on like this

From Jaimini point of view

If a karka is aspected or conjuncted by a gyantikarka, it’s characteristic or quality gets afflicted.  Therefore one will get sufferings and pains from those relations, whose significance that planet holds.  Here gyantikarka Mars is afflicting Venus and Moon.  Both has control over emotions and love.  Affliction on them caused him troubles. Bad mood swings and broken relationships

Now, the coming dasha shall be of sub period of Jupiter in major period of Saturn. This indicates that during this time, but for a brief period in 2020, he shall be in a steady relationship, for a while. Marriage won’t happen. If he tries to tie a knot, then again break up will happen, like always. Stars in sky play their roles, no matter whether it’s a common man or a superstar.

In the coming dasha of planet Mercury,  which signifies business and commercial activities.  Here in his charts,  it’s lord of 5th house ie. Learning,  creativity also 8th lord which denotes some kind of change in profession or break in present patterns. Which means,  he shall  focus more on producing, directing movies, hosting for shows and basically will be doing business more rather than acting.  Perhaps will give chance to new talented artists in the future. Launch new ventures

7th and 12th houses has mere 22 numbers.  This is far below than average.  That’s why failed in relationships